I bought a Neti pot today. I had thought I was going to have to scour health food stores and then swallow my pride and give Whole Foods some of my hard earned money. No fear. I was in the CVS (local big drugstore chain in the northeast) and lo and behold they are now carrying them. They even had a store brand one for cheap, so 3 guesses which one I bought.

Now I know you are all just dying to hear me tell you all about flushing out the old snot locker.

Surprisingly, it wasn't that bad. I think I was expecting that it was going to burn and screaming would at some point be involved, not to mention crying like a little girl. Honest, if you follow the instructions, not bad. I don't think it's something I want to spend all of my spare time doing, but I also have to say it has done a better job of clearing out the congestion problem than all the benedryl I've been popping.

I also have to admit, it's kind of gross. Essentially, you fill this little pot that looks like a cut rate version of Aladdin's lamp with salt water, stick it in one nostril and pout water up your nose. Water comes out your other nostril. And my use of the word water is just to spare you a bit. I'm sure you get the idea. Then you get to do the other nostril. Then you blow your nose. Once again, I'll spare you. Let's just say, it's not pretty.

Actually, I have less of a head ache than I have had in days. And I am breathing through both nostrils! Now if we would just get a hard frost to kill off all the friggin' ragweed, I will be able to spare myself this new indignity until next spring when the trees start going at it again.

Posted by evilganome at 6:05 PM | Links to this post

I had stepped out to indulge in a quick smoke and had wandered over to a more secluded area than usual, just to get some peace and quiet because working with Excel spreadsheets all day is making my brain hurt.

A minute or 2 later I saw my office mates come trooping out the door. They plunked down and after a few exchanges of shading our eyes and peering dramatically at each other, it was clear that if I wanted company I was going to have to get up and traipse over to them. Which I did.

When I got over to them, they announced that they were lazy. I suggested that they should be ashamed of themselves, because I am pretty much twice their age.

Co-worker 1: Yeah, but you are in better shape than all 3 of us put together.

They all looked at each other and nodded.

Co-worker 2: Shit! You have more muscle mass than all 3 of us put together.

Once again, they looked at each other, this time nodding vigorously.

I suppose I should feel complimented, but I still say they are just plain lazy.

Posted by evilganome at 4:12 PM | Links to this post

I would like to know what earthly purpose ragweed serves, other than making my life a misery.

I would also like to know where all these allergies came from.

When I was a kid, nothing bothered me. I could roll in poison ivy and I wouldn't break out, for Christ's sake. Now, every spring when the trees are feeling frisky my sinuses shut down and in the autumn, when the ragweed gets going I feel like I need a respirator. Or at least a drain.

Yesterday, a friend told me about a thing called a Neti Pot. I gather that the function of this little item is to pour salt water up into your sinuses and flush them out. I think it will be a good indication of how desperate I am that I am actually going to go out and buy one of these things. And don't make that face! You're not the one that is going to have to use the thing.

For me the worst part is that feeling like someone came in the night and poured concrete into my sinuses makes the act of concentrating next to impossible. Unfortunately, I have a job that requires me to pay attention. What with one thing and another, I have the attention span of a goldfish right at the moment.

I should be looking at the bright side of all this. Considering the state of the world right now, it is probably just as well that I cannot hold anything in my mind much longer than about 5 seconds.

Then there is the fact that this has been screwing with my workout. I am hesitant to go into the gym when I have to worry about dropping a heavy weight on my head.

The light at the end of the tunnel is that this too shall pass. We are bound to get a hard frost soon, which should take care of things for another year. Until then, if my posts seem incomprehensible at least you know I'm not on drugs. Other than decongestants.

Posted by evilganome at 6:56 AM | Links to this post

Ann and Nancy hand out an asskicking

I generally don't write about politics. Other people do it much better, with more insight and intelligence. Every now and then though, you come across something and you just want as many people as possible to know about it.

I stole this off of Voenix Rising. (Thanks Alex) Even if I didn't have fond memories of Ann and Nancy Wilson from my long lost youth, I would fall in love with them just on the strength of this letter! 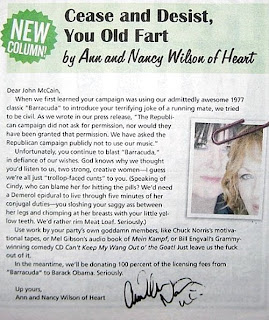 Go out and buy a copy of "Barracuda" if for no other reason than to piss John McCain and Sarah Palin off!

Posted by evilganome at 7:09 AM | Links to this post

I apologize for not posting recently. It has been crazy at work and I have also been trying to deal with a few problems at home as well, not the least of which has been sleep deprivation.

The sleep problem has reached the point where Dr. Fred sent me off to have a sleep study done. I will be getting the results in a couple of weeks. In the mean time, Tylenot PM is my new BFF. The one thing that has been ruled out is sleep apnea, since they didn't have to come in and hook me up to a CPAP mask. Otherwise it is all still a mystery.

Autumn has also snuck up on me. I have noticed the days getting cooler and this morning when I woke up it was to discover that you could store furs in the ganome lair. Time to get out those warm layers again! I noticed is that it is once again dark in the morning as I crawl off to the gym. The other morning I noticed the first traitor leaves starting to turn color in preparation to dropping off the trees.

Wasn't it just the other day that the leaves were finally coming out?

Where the hell did summer go?

To cheer myself up, I am going to meet up with RG later and get some coffee and leer at cute young men. It's always fun to spend time with RG mostly because you never know what is going to come out of his mouth. With the economy tanking and the election coming up, I am sure RG will have plenty to say.

Be that as it may, I'm back! Now if I can just get some sleep I may once again be able to string together the occasional coherent sentence.

Posted by evilganome at 8:59 AM | Links to this post