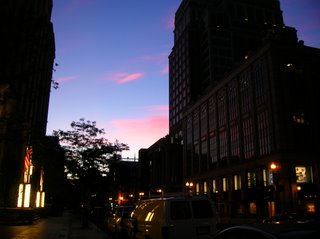 My brain is behaving like an over stimulated 5 year old. It is running around throwing tantrums and refusing to go to bed and really needs to be sent off for a time out, because it just can't focus.

Goodness knows there is plenty to write about. The wedding follies and the latest atrocities commited by my family. The horrifying behavior of the newly arrived students in Boston. The stupidity of the T here in Boston and the nightmare that is being created by the transition to the Charlie system, not to mention the amount of litter being created by the stupid paper tickets. Some observations on the hazards of socializing. A couple of how did I get myself into this situations that are working themselves out for better or worse and I am sure there is more, but like I said my brain refuses to focus. It is jumping up and down on the sofa and screaming "I won't, I won't, I won't!" So until I can convince it to sit quietly and, well, think I'll just have to settle for posting this photo I took of the early morning sky near the New England Life building. It's about the only time I have ever thought that this particular architectural monstrosity has ever looked good.

Posted by evilganome at 7:17 PM | Links to this post

It's not your fault

I was reading the news this morning on the internet and this piece leapt out at me. I love this stuff! It's not that we, as a society, are getting lazier and more careless, it's evolution. You have to wonder what the adherents of intelligent design will do with this. God want's you to be the size of a house? I'm sure that we'll hear more about this. Merciful stars, as a friends grandmother used to say.

Posted by evilganome at 5:25 AM | Links to this post

Over the past year I have been making slightly better money, so rather than being abjectly poor, I have been basking in the warmth that is scraping by. What this had meant was that I had been unable to buy new clothes, but now I find that occasionally I actually have a couple of bucks to spend replacing the shabbier occupants of my closet and dresser. To celebrate this happy turn of events I have been working at a wardrobe upgrade. However, since I am still working with a limited budget, I have had to prioritize. What do I most desperately need?

One item has been something of a major focus, though at least for me, not a glamour item. Underwear. This has lead me down the path of trying to find the ultimate in comfy tighty whities. So far my faves have been Nicole Miller trunks. The main problem with them has been, having once found a package a year ago, I have been unable to find them since. I have been led to believe, after some consultation with friends who are much more avid consumers than I am, that it could well be that they were an item for one season and are no longer available at all.

My, how times have changed since the days when it was a choice between Fruit of the Looms and Hanes!

The choices are dizzying but that very fact sets me aback. What to get? There are bikini's and thongs as well as boxer briefs, trunk briefs, briefs, boxer shorts and trunks and hybrids and variations on all of the themes. Low rise vs. regular waist, Y front or button front or no front door at all. For my money one of the most notable improvements is that a lot of undies are now anatomically correct. Gone are the days of underwear that were designed for Ken dolls. A man may now purchase a pair of drawers that are "contoured". In other words it has a cup. It makes sense and also makes you wonder what were people thinking of for all of those years, wearing crotch binding BVD's? For many years in my youth, it was just this problem that had me eschewing underwear entirely and choosing to go commando. I had given boxers a try, but they have a tendency to creep, so that by the end of the day the legs having worked there way up into the crotch of your jeans made you feel as though you had dropped a load in your pants. Now, it would seem a fellow is safe to slip into whatever style of shorts he favors confident in the knowledge that, whatever style he favors, he will be able to make it through a busy day without becoming crotch bound.

With choice however comes responsibility, which brings us to the question of sizes. Should they really be manufacturing XXXL thongs? I think not, but as long as I am not expected to look, should I care? Considering the growing number of land whales, and our politically correct society, where people have tried to sue MacDonald's because they are fat and the victim in question is unable to display any self control, ergo it is the fault of the fast food industry that they have achieved the circumfernce of the Graf Zeppelin, it will only be a matter of time before we revert to the Victorian ideal that tubby is attractive. We just have to feel good about the fact that we are an aneurism just waiting to happen, and that one individual is consuming enough food to keep a small third world nation fed for a year!

As one of the few in this country that grew tired of dragging 25 extra pounds of lard around in my ass I have become a regular habitue of the gym. This has worked out fairly well from my point of view, even to the point of where one of my straight male co-workers commented recently that I have a nice ass. It's good for the ego, but this is all relative. I am 51 and do not have the skin tone that is going to make anyone anxious to see me parading around in a g-string. So does anyone really want to see some weeble in a pair of ultra brief bikini's? God knows the packaging only encourages things. It doesn't matter whether the size is S,M,L,XL or XXL, there is the same picture of the incredibly buff torso assuring you that if you buy this product, this is how you are going to look. I think that as a matter of truth in advertising they should find people who are size appropriate to model for the different sizes. Would a graphic representation of what someone actually looked like do anything to deter inappropriate lingerie purchases? Would it make anyone actually think before they polished off the bag of cheese doodles in front of the TV? Probably not, but since all of the news hubbub about obesity as a health problem seems to have had no effect, and we are becoming ever fatter it might be worth a try. Though don't look to the retailers to encourage you to slim down.

If you have a waist size of 34"+ you're all set. As someone who desperately fought their way down to a 30" there are more days than not that I have to resign myself to the fact that I am not going to be able to find any covering for the southern regions of my person because the smallest size on the rack is a 34 waist. Even when I can find something that will fit me the selection is pretty pathetic. Part of the problem is that I shop in discount stores, and so there are no regular items carried per se. I believe that Marshall's and T.J.'s run on the same principle of outlet stores everywhere, and the items for sale are all overstock. However, unless the less weight encumbered have some jungle drum system that I am unaware of that alerts them to the lastest shipment of clothing in sizes intended for the less cicumferentially challenged, and so alerted descend on the stores stripping the shelves of all things size S, I am inclined to think that the paucity of smaller sizes is due to the fact that what regular retailers are ordering is clothing for the more full figured, because that is where the demand lies.

We give a lot of lip service to "empowering" people. The language is, everybody is special, everyone has something to contribute, we need to love ourselves the way we are. If you expect someone to make some sacrifice, try harder, admit they are just not good at something, or try to evolve and become more than they were yesterday, you are commiting that worst of all crimes these days. You're being judgemental! You are expecting people to mend their ways, take personal responsibility and when called for correct their own mistakes and not expect someone to form a support group for their personal brand of stupidity. So guys, if your underpants can double as a fitted queen sized sheet, don't worry, your just expressing societies failure to provide you with an easy way to be a piggy couch potato and still maintain a robust physique.

I on the other hand, having allowed myself to become a slave of the fitness industry, will just have to struggle on with getting adequate exercise and not stuffing every piece of food that lands in front of me into my face. That said, I am going to head out and see if there are any Labor Day sales going on and try and find a pair of slacks that won't double as a circus tent.

Posted by evilganome at 7:18 AM | Links to this post