On our Friday coffee break, Buttermonkey, Boyflex and I were joined by the babacious Michele. We went outside so that the sinners could have a nicotine fix, and after we had finished, Michele announced she didn't want to go back. "Let's run away with the circus. We could do it, they're in town." Buttermonkey, who worked for Ringling Bros. once upon a time, vetoed the idea.

I piped up with, "Let's just tell people we were captured by pirates!" This was met with a certain amount of enthusiasm, especially after I added "Yeah, I could say I was abducted by pirates and they did terrible things to me! They didn't want to, but I made them."

Posted by evilganome at 2:16 PM | Links to this post

I left the gym a little earlier than usual this morning, and decided to indulge in my 2 remaining vices, caffeine and nicotine. After walking out of my morning spot, I went across Tremont to sit on a bench in the common and watch the garbage and pigeons fly around. It is a beautiful fall morning and the sky is fading from a pale silvery blue in the east to brilliant aquamarine in the west, the air is cold enough that I was wishing that I had put on something warmer than a jeans jacket. As I was just sitting there getting lung cancer on the installment plan, I heard someone saying, "Hey, Poppa?" Looking up, there was a pretty disreputable homeless guy. "Hey, Poppa... could I have a cigarette please?" I looked at this guy who I doubt has seen a shower for quite some time. Where his skin wasn't red, it was blue from the cold. I couldn't tell you how old he was. He had obviously been living rough for quite a while and he could have been 70 or he could have been my age. I pulled out the pack and gave him a smoke. He lit up and thanked me a couple of times, and as he was getting ready to walk away he said, "Nice hat."

I'm not sure why this has struck me so much. Maybe because the way the world is working these days, I like a lot of people am only a paycheck or 2 away from the streets myself. Maybe it was because this guy who hasn't got much of anything else left, has unlike so many who have so much, has managed to keep courtesy.

I read an article yesterday about the McNews culture and how the media keeps us entertained with celebrity news, distracting us with the hijinx of the rich and famous and ignoring real issues that are just too hard to think about. One of the issues sited in the article was the growing population of the homeless in the land of plenty and the growing disparity of wealth. I don't know what it will take to make people realize that unless we do something, make some effort to be a little more selfless, that we too might wind up asking some older guy for a handout because having made bad choices or just because of bad luck we are out on the street, hoping someone will give us a handout, because the society we live in won't give us a hand up.

Posted by evilganome at 8:37 AM | Links to this post

A Few Of My Favorite Things

In an attempt to get myself out of the cranky mood that I have been laboring under for the past few weeks, I have been trying to concentrate on some of the good things that have been making themselves available to me. Among them that Terry Pratchett has a new book out, as well as Neil Gaiman I also recently bought Raul Malo's new album, "You're Only Lonely, which if it is not one of my 5 star choices still gets 4 if not 4 and a half stars. Last but not least, Idle Thoughts of an Idle Fellow by Jerome K. Jerome is in print again. If you've never read "Three Men in a Boat" I suggest that you run out and get a copy, and prepare yourself to be embarrassed by laughing out loud, if you are reading it on your commute. There, I feel better already!

Posted by evilganome at 7:47 AM | Links to this post

I'll have my regular 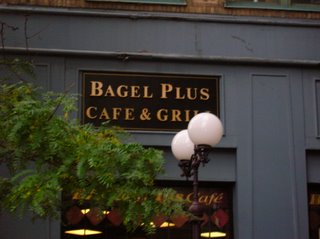 Everyone has their routines. To the horror of my friends I have my own which involves getting up at an ungodly hour and heading off to the gym before work. I like my gym because it is small and unpretentious. I also like the fact that the early morning crowd tend to be like myself, older and no one is going to win the Mr. Universe contest. Then after an hour and half of self inflicted torture I head off to work. On the way to the train I stop here for a cup of joe. Everyone talks about how much they hate Starbuck's, the Gap and all of the other chains but they all wind up shopping there. I like my new coffee stop because it is a Mom and Pop. I have been going there a couple of months now, and as I walk through the door, the guy behind the counter is already pouring my coffee! It takes me back to when people had their regular places, knew the name of the propriator and the more social types knew the other regular patrons. I doubt my consumer choice is going to start a trend, but it's nice to know that it is still possible to have a regular place that isn't annonymous, and if you are still just a face, at least you are a familiar one.

Posted by evilganome at 5:44 AM | Links to this post

A Couple of Views 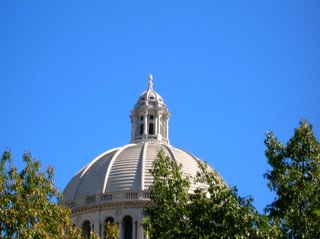 I was walking down Mass. Ave yesterday and as I was going past the Christian Science Center, I thought I was having a hallucination. The bells started ringing and I had to stop in my tracks, because against all common sense the carillon was playing "Home On the Range"! Was it one of Mary Baker Eddy's favorites, or is it unbeknownst to the rest of the world a Christian Science hymn? 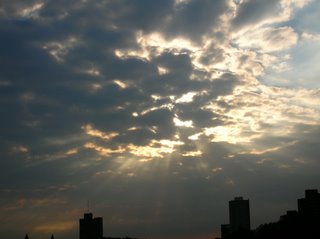 Then walking home this evening, I was treated to what I think of as "hand of God" skies, where the sun is behind some clouds and the light really does come out in rays. Fortunately, I had my camera for a switch, so here it is folks.

My final slightly odd sighting was a pair of red-tailed hawks, having and aerial quarrel over some critter that one of them had in it's talons. They were swooping and screaming over the park and nearby apartment buildings. It has to be 20 years since I saw the first red-tail that had decided to make the Fenway neighborhood its home, but somehow seeing them just never gets old. Unfortunately, my digital camera isn't good at stopping motion, so you'll just have to take my word for it. It was a sight to see, and after a slightly tough day it did my heart good.

Posted by evilganome at 5:46 PM | Links to this post